I did mention I had visions of recutting? Yes? So I ripped out all the stitching and hung the pieces in the closet overnight. This fabric, cannot be pressed!  I thought it was supposed to be polyester.Don’t think so. Spritz with a little water and allow the pants to hang over night praying that’s enough to pull out any wrinkles. Next, where to start this recut/revised muslin? What adjustments to take forward? What to ditch? What to add?

Well I had decided to fold-out 1″ horizontally across the torso of the pant( I showed that in one of the previous fitting pics). Did you realize that while it made the torso fit and look better, the legs were shorter. So even though I won’t be able to add length for the recut, I changed the leg to remove 1″ from leg length. Next yes removing 1″ from the torso length made the pant hang higher on my body and made the leg appear shorter.  I kept the needed CF wedge and  the 1/2″ added to both front extension.  When I checked the back extension, I found I had added 3/4″. I adjusted it back to 1/2″  I’m not sure, I could need more length, then again, I may not. For now, both muslins, especially #1 looked good with 1″ total extra crotch length.  I had thought the 2″ of seat room was too much when I added it to the tissue, but I used it anyway. I reasoned I’d rather have too much than too little. With Muslin 2 fit by increasing both side and CB seams I knew it was too much.  For the Recut, I decreased the additional seat room to a total of 1/2″ ( sliding the block over only 1/4″) taped and redrew crotch and inseam.

Then I cut a 3rd Back tissue. Why? Because I decided to test Jen’s diagonal dart for Jeans on this slim pant pattern.  I feel like, I’m close. I see so many good features with the Airlie.  If the diagonal dart is a mistake, I’d rather be able to start over at the point things were right. So I cut Back Tissue #3,  folded out a diagonal dart starting below the inseam notch, crossing the thigh and upward to the side seam.  My dart rapidly progressed from zip at the inseam to 1″ under the sea and 2.25 by the time it reached the side seam.  Well that’s not going to work when the side seams are sewn together. The amount of the side seam removed by the dart has to be offset. At the top of the side seam (waistband), I drew an upward line 2.5″ ie. the same as removed by the dart; and  joined that line with the  CB.   Maybe one of the reasons I’ve not adhered to using this diagonal dart is all the work it involves. You must make a muslin to determine where and how deep the dart needs to be and then a 2nd muslin to be sure it was correct.   I wish I could somehow combine the adjustments, but previously I found it just doesn’t produce the same result. It’s rather like a mathematical problem which must be solved in a specific order.  Each alteration affects the others and each must be done in turn to produce the desired result.  It’s scary too.I’m always wondering if I’ve made a huge mistake when I reach this point… 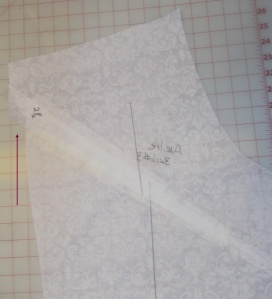 Which had to be smooved 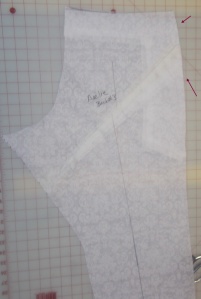 but I panicked when I saw this: 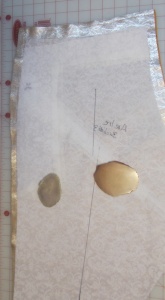 Had to stop and think. OK excess fabric above the waist is correct. The horizontal tuck would have pulled the pant shorter and created that.  CB and side excess?? When I reduced the extra seat room that should have decreased the hip width 3/4″ almost back to draft.  I thought more fabric would be removed lower in the leg, not up there by the torso. But maybe it has to be removed up there?  I mean we always remove length across the torso to eliminate the mess under the seat. This could be right.  But I’m still not sure. I pulled out Back 2 and compared it with this new tissue. The difference seen on the fabric was reflected in the difference between the tissues (Doesn’t show in a pic because both pieces are white which photos about as well as 2 pieces of black.)

Then I cut fabric. Still uneasy, I basted the side seams at 3/8″ instead of 3/4″ used on Muslin 2. Not finishing seams, hemming and all that other stuff that takes a garment from wearable to great, well not doing that means the Recut was ready for pics in less than an hour.

I’d say the sides and front are not bad

If it wasn’t for this fabric to show every curve in disgusting deatil, I might wear these.  Sigh, the back…

makes me feel like giving up. OK Good stuff. The waistband is sitting horizontal. I both see and feel that but there is still sort of a poof at the CB.  Does not appear too tight across the seat i.e. it the light isn’t bouncing off of ol’ Betty blinding me in the process.  But the leg wrinkles. Counting left leg only, 3 downward diagonal meet at the inseam; one horizontal and one upward at the knee. Because this is a solid, I can’t really see the fabric being pulled upward towards the crotch like I did with Muslin 1.  There are definately less wrinkles on the back leg and much fewer if any point towards the crotch. The question would be: Is another diagonal dart needed? I remember my communications with Jen the first time I encountered the diagonal dart.  In essence, yes you can increase the depth of the  diagonal dart and change it’s angle but it distorts the pattern more and more to a point where the pattern is unusable.  She actually suggested trying to scoop the crotch once the dart was deeper than 1″ (remember this was several years ago and further experience could have changed her mind.)

I opted to first increase the side seams and take pics.

I always put off scooping until nothing else has an effect because there is no going back from a scoop.  Once the fabric has been cut away, the pants are done whether you are or not.  So thinking  all else had been tried, I scooped the crotch and took pics.:

At this point, I’m concluding  a very slim pant is just not a good choice for me. Even my 5682, supposedly a close jean pant, has an 17″ hem circumference.

I did enjoy sewing with this  pattern.  Absolutely envy all of you who can fit Style Arc pants.  I’m still interested in the pocket and I will copy the pieces and adapt for one of the pant patterns that I did fit to myself.

Just for the record

All the above, plu scooped back crotch 1/2″

View all posts by sdbev