As the day wore on, I realized my pants felt tight…. at the waist. After a trip through the laundry, I opened up the waistband and added another 2″ of elastic. I’ve taken to inserting elastic in all of my pants waistbands.  Did that after I discovered my favorite RTW jeans had a wide soft elastic in all their waistbands.  I find it especially wonderful on those days when I overeat, like Christmas and New Year’s but also those day my internals aren’t working well and things….. back up/swell up. Anyway, elastic in all my waistbands. I recently bought a different elastic. I’m not totally satisfied with the elastic on hand.  It is soft which while being comfortable, doesn’t always hold up my pants as needed. May have something to do with my current weight and ergo the weight the elastic has to support. So, new elastic cut the same length as the elastic I was using  isn’t long enough to be comfortable but not short enough that I immediately realized I had an issue. Not a time-consuming or tricky alteration. Finished in 10 minutes, maybe less. I wondered if it would have an effect on the final appearance and Alexa took pics to compare with the shorter elastic application:

Not all the wrinkles are elminated. My side seams  are still too long a which adds drapes along the sides extending toward CF and CB. I do think it significantly improved the front, especially and surprisingly at the knee.  What is really curious is the back view compared not with the previous back view but with my favorite DG2 jeans

They look a whole lot alike!! Not exactly but a whole lot.  Sadly, as I continue to age my body continues to change shape.  I had to go up a size for my DG2 jeans because of my tummy. I’m buying 16PW instead of 16P (they recommend a 14 for the size of my rear but I don’t like sprayed-on looking jeans). The DG2’s  are still superior fitting, but I’m thinking maybe I should work some more with 5682.  I mean, I was saying “Let’s give this pattern a rest until I get smarter”. Now I’m thinking gee a little tweak at the knee? or????

I’ve had these all but finished for a day or two. They lacked only the button and buttonhole. I think I dwaddled due to mixed feelings. They are not as good as I would like but better than they were. The crotch corrections/changes were certainly helpful.  Well let’s start at the top.

I’m really annoyed at myself for not transferring a critical alteration to the pattern. I speak of the simple darts/wedges which make the side seams shorter between waist and high hip. I knew it needed to be made.Knew how much to make.  I even wrote in my blog post that it was done.  Alas, not so.  For I was stunned at the first fitting to find the sides drooping.

I immediately determined the amount which needed to be shortened by pinching and basting this pair.  I made the change to the tissue right there and then. However, I didn’t keep the change on this pair of pants and that is how the sides will look until I discard these pants. See, I was so certain I had made the alteration to the tissue, that I trimmed the yoke to pant leg seam allowances down to 1/4″.  This makes it so easy to just serge the two together during construction. Makes it horrible if further change is needed.  Ripping those seams out tends to fray the edges beyond use.  To make the alteration permanent for these pants would have just about eliminated the back yoke at the side seam. It would definitely look strange and worse all the seams at that point would be lumpy; bulky.  The sides are what they are and truthfully most people won’t even notice.

I also worked on the excess ease across the thigh.  I offset the back side seam 1/2″ from the front. Now there is a trick to this. I need to remove the most ease almost directly under my rear.  At the same time, I absolutely cannot remove more fabric across my seat which is a mere 5″ above.  I have to dip pretty sharply from full hip, to under booty and then smoothly back to knee. I did not feel 1/2″ was enough and tried 3/4 and a full inch. While a full inch was better, the diagonals radiating from my inner knee became worse withe each increase.  I finished by offsetting only the 1/2″ and I’m not real happy with that:

So I think the back looks quite nice from waist to crotch and again from knee to hem but in between does not make me smile; and I will not be leaving that 1/2″ offset in place.  I’d rather wear the pair with the extra 1/2″ ease. Which makes me sad. If I want a nice smooth back leg I have 3 options  1) trousers 2) skin-tight 3)center back-seam.s  I was hoping to make this pattern a corner-stone for all pant styles .  ATM, don’t think that’s going to happen. Sigh, I haven’t been able to fit a Big 4 pant in years. At least now I know what is wrong with the crotches: the stride is just too short.

That takes us around to the front

Truly this was a surprise. The crotch feels fine. I was afraid that scooping out the front would make it too tight. I don’t think that happened just because I’m wearing the pants as I’m typing and they feel comfortable. Part of those front torso wrinkles are from the sides being too long. But I can’t be sure that alteration will take it all away. I could ignore the wrinkles at the knee. Although I prefer them to be on the back of knee and not the front. I’m tempted to say the back side seam offset cause the issue but the offset tapers to nothing before it reaches the knee. I don’t know, maybe the entire lower leg, starting at the knee needs a little more ease. That hem was at an incredible 14″.  I added a little width in one of the earlier variations just to be able to put my foot in and out without catching and pulling the hem.

And I have to take in account the fabric characteristics.  This fabric had 10% stretch. You wouldn’t even be able to calculate that stretch using the standard 4″ sample as on the back of the pattern envelopes. I don’t trust that method anyway. It’s too small. Fabric is different over a 10″ or more (my butt needs 43.5″).  I use a 10″ sample. The fabric stretched 1″. It has 10% stretch.  These pants might look a whole lot different with a 50% stretch fabric.

However, when I’m all gussied up, they don’t look bad

Dressed as above, they compare favorably with my DG2’s, don’t you think?

Psst All the pics except the last one were lightened so we can see the details. All of them, including the last, should be clickable so you can see a slightly larger view.

It was wonderful to make 6461 and create a nicely, near perfect, fitting pant. It inspires me to go back to my Near-TNT pants patterns and tweak them towards perfection.  Today I am working on 5682 which I think will be the workhorse of my wardrobe and possibly a template/block/sloper when fitting other pant patterns.

The last iteration of 5682 was pretty good.  I made the hip-line and inseam darts are planned. They are not tested but I’m still stepping ahead by also tweaking the crotch.  First I compared 6461 with 5682.  I was surprised my not surprised to see the differences , 6461 is resting on top of 5682

I also colored in the differences notable the scooped crotch of 6461.  Surprisingly, the back crotch of 5682 is already and 1/8″ longer and of course the inseam has a bit more tissue too.

The fronts were astonishing!

Again shaded in black. The inseams are the same length, same shape. But the crotch! 6461’s front crotch has a much deeper arc.

I added tissue along the inseam extending just above the crotch and all the way to the knee on both back and front of 5682.  I made a tick mark 1/2″ out and 1/4″ down from the previous crotch  point. Then using my curves, I drew a new crotch and a new inseam. Where previously I have always tried to join the inseam curve as quickly and highly as possible, this time I tapered it all the way out to the knee.

Repeated for both front and back pattern pieces and then rough cut the excess leaving at least an extra inch all the way around. Why? Well my previous attempts to add extension length and even just scoop have resulted in a peak where the back and front join like this

I wanted to at least attempt to avoid that peak.  It is not only uncomfortable and has to be trimmed but often the entire change can be lost during the sewing/trimming.  Instead, I dotted in the inseam stitching line on both front and back pieces. Then pinned together along the stitching line and opened it up.

I am happy to see that the peak is not sharply forming. Nonetheless, I trimmed the crotch to a nice smooth U

I closed, or folded the back and front back together and trimmed both front and back inseam while still pinned together 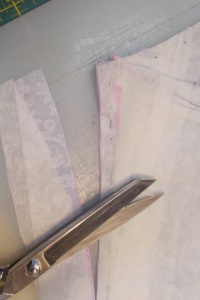 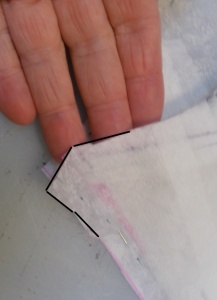 I love this shape because when sewing the inseams fit together perfectly. There is no question as to whether the points need to match or overlap which is important because if I do it wrong, the crotch does not form a beautiful U. Oh and ripping out that stitching can ruin the whole dang thing.

II opened the front. Aligned my ruler with the crotch/fly join and top of pant. Measured out 1.5″ and drew a new fly-fold line and cut the excess away.

Naturally, I”m hoping the new shape did not remove the 3/8″ wedge I added to accommodate my tummy. I think not, but we’ll see.

Lastly, I folded the fly extension on the front back like it will be after sewing…. 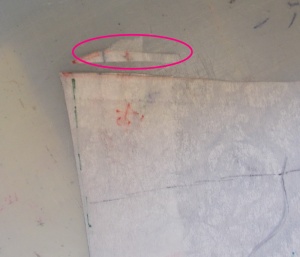 and trimmed the little bit that sticks above.  Again, that’s a picky item that makes sewing easier; faster.

I selected a fabric of unknown age.  I think this must have been a $1 Walmart fabric because as I spread it out for pressing, a second piece fell out. The second piece was obviously a remnant from an earlier project but I don’t recall it at all. I think this is a good pant fabric.  It has the weight of a good pant fabric and about 10% stretch.  It is pin striped white on grey. Stripes are now slighly less desirable for my pants due to the wedge I added at CF for my tummy. On any solid and nearly all print fabrics, it is unnoticeable. But on a stripe, the CF will show the joining lines. Very obviously. Fortunately, I generally wear my tops long enough to cover that up.

I pressed carefully and as is my custom, laid out pattern and fabric. Turned off lights and went upstairs for dinner. Tomorrow is after all, another day.